Montepulciano is an Italian municipality with 13,673 inhabitants, located in the province of Siena in Tuscany. This town is situated at an altitude of 605m above sea level, between the Val di Chiana and Orcia (valleys).
It has an ancient and long history and its origin dates back to the 4th century BC in the times of the Etruscans.
This town is also known thanks to the famous and well-situated vineyards, from which the Nobile di Montepulciano DOCG wine is produced.
The inhabited town center has the typical “S” shape of a medieval borgo and is surrounded by three circles of walls built around the 14th century. According to the legends of Porsenna, Lucumone di Chiusu it was founded in Etruscan times:
some documents and findings found in the fortress testify that it existed already in the 4th-3rd century BC. During the Roman period it was the seat of the army to defend the consular roads. It was evangelized by San Donato, bishop of Arezzo, in the 4th century.
In the place of the present church of the Madonna di San Biagi, existed the Sancta Mater Ecclesia, in the Castello Pulliciano. In a document of 715 – during the Lombard period – one witnesses its first development: in fact, in some notarial deeds of the archives of the Abbey of SS. Salvatore on Mount Amiata can be found documents, especially one from 806, which, thanks to witnesses who were all from Montepulciano and were all priests, clergymen, a doctor and a goldsmith, testify that even then there was a high civic and cultural life in that place.
In the 12th century the Republic of Siena wanted to subjugate Montepulciano, which until then had been free and rich, and a series of wars began, which the Poliziani family opposed with help from Perugia and Orvieto. From time to time, they also received an eager support from Florence with mixed results. 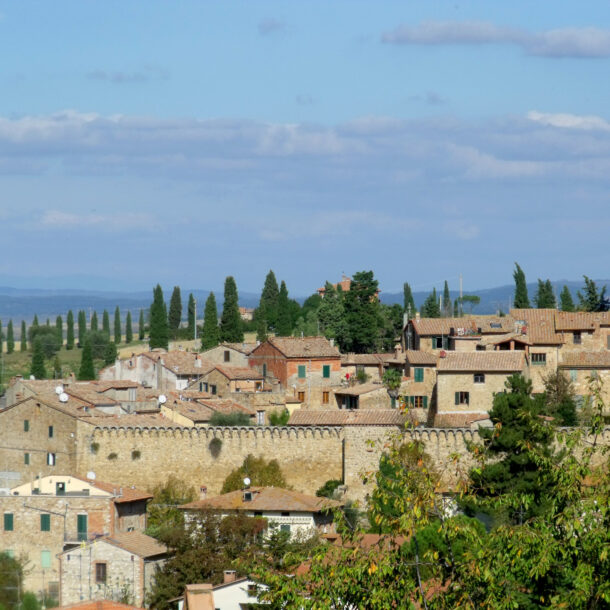